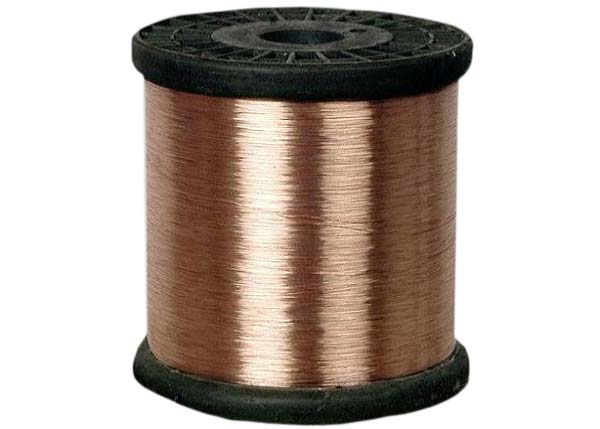 Copper Wire – 10g to 22g is available from stock in 10 lb spools.  Other gauges are available upon request.

Please contact us with your requirement and we will provide pricing and/or additional information.

Electrical conductivity is a measure of how well a material transports an electric charge. This is an essential property in electrical wiring systems. Copper has the highest electrical conductivity rating of all non-precious metals: the electrical resistivity of copper = 16.78 nΩ•m at 20 °C. Specially-pure Oxygen-Free Electronic (OFE) copper is about 1% more conductive (i.e., achieves a minimum of 101% IACS).

The theory of metals in their solid state helps to explain the unusually high electrical conductivity of copper. In a copper atom, the outermost 4s energy zone, or conduction band, is only half filled, so many electrons are able to carry electric current. When an electric field is applied to a copper wire or plating wire, the conduction of electrons accelerates towards the electropositive end, thereby creating a current. These electrons encounter resistance to their passage by colliding with impurity atoms, vacancies, lattice ions, and imperfections. The average distance travelled between collisions, defined as the “mean free path”, is inversely proportional to the resistivity of the metal. What is unique about copper is its long mean free path (approximately 100 atomic spacings at room temperature). This mean free path increases rapidly as copper is chilled.

Because of its superior conductivity, annealed copper became the international standard to which all other electrical conductors are compared. In 1913, the International Electrotechnical Commission defined the conductivity of commercially pure copper in its International Annealed Copper Standard, as 100% IACS = 58.0 MS/m at 20 °C, decreasing by 0.393%/°C. Because commercial purity has improved over the last century, copper conductors used in building wire often slightly exceed the 100% IACS standard.

The main grade of copper used for electrical applications is electrolytic-tough pitch (ETP) copper (CW004A or ASTM designation C11040). This copper is at least 99.90% pure and has an electrical conductivity of at least 101% IACS. ETP copper contains a small percentage of oxygen (0.02 to 0.04%). If high conductivity copper needs to be welded or brazed or used in a reducing atmosphere, then oxygen-free copper (CW008A or ASTM designation C10100) may be used as plating wire.

Several electrically conductive metals are less dense than copper, but require larger cross sections to carry the same current and may not be usable when limited space is a major requirement.

Login to Alert Sales
Reset Password
Enter the username or e-mail you used in your profile. A password reset link will be sent to you by email.